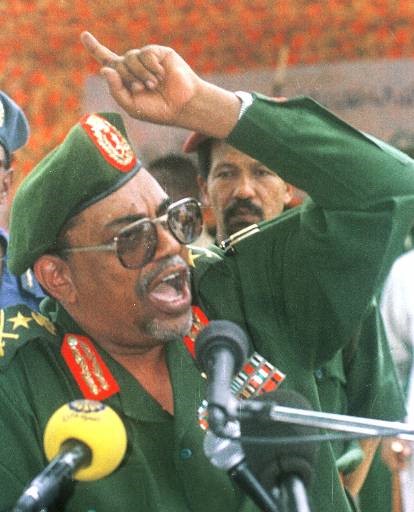 This is a story with a twist of irony…. It started in Sudan when a military dictator took over as leader.  Omar Al-Bashir started his reign with an AK47 in his one hand and a Quran in his other.  Bashir or Basheer is a male given name and derived for Arabic it means: “the one who brings good news”.

Yet, while addressing the nation with a crocodile smile, he proclaimed darkness to his country’s people, already fragile.

Sudan became one of the worst dictatorships in the world.  The Christian minority was brutally attacked and its most basic human rights were violated.  The persecution of Christians intensified since the division of the country in July 2011 when the predominantly Christian Republic of Southern Sudan was founded. Since then, the government in Northern Sudan has been systematically destroying the churches and forcing local Christians to leave their homes.

Was there another call?  Other than the call to Islamic darkness?  Another man with a real smile and real intentions to bring good news?  Since 1992 Bro. Amir is under another call.  The Call of Hope.

As a former Muslim and pastor of the largest Protestant church in Northern Sudan, Bro. Hafez was a thorn in the side of the authorities. The “National Security” summoned and interrogated him every month.

When the Sudanese dictator Omar al-Bashir gave another of his infamous speeches on television, Bro. Amir thought that his church would soon be razed to the ground. The dictator said, “I will soon make sure that all the remaining churches in Sudan will be torn down by a presidential decree.”

Was Omar Al-Bashir unstoppable?  Almost.  He was … until he tripled the price of bread.  That which should give life to the people, he took away, and with that the military army of Sudan took away his reign of an iron fist.

Bro. Amir reports: “This inflammatory speech was the dictator’s last televised speech! Only a few hours later, tens of thousands of Muslims took to the streets of the capital Khartoum. They shouted, ‘Hurriyya, Hurriyya!’, meaning Freedom! ‘Stop the dictatorship, we want freedom!’ In the following days, the protests spread throughout Sudan. The country descended into chaos.

This chaos gave our church the opportunity to finally go out and preach the gospel to our Muslim compatriots. Our singing teams sang faith hymns with Sudanese melodies in the midst of thousands of demonstrators. We distributed 1,200 booklets entitled ‘Jesus Christ – the only true liberator of mankind’ in a single day. One of our evangelists preached to at least five thousand Muslims about the true freedom that only Jesus can give us: liberation from the slavery of death and sin. Sky-News Arabiya, the second largest television channel in the Arab world, reported about our outreach.”

“The new president is expecting you tomorrow!”

On April 11, the Sudanese army revolted against the dictator Bashir. There was complete uncertainty about the plans of the new rulers. On the third day after the coup, I stood at the entrance of the church when suddenly a military Jeep stopped at the roadside and armed soldiers marched in my direction. I expected the worst. “They’ll probably arrest us and tear down the church”, was my first thought.

Suddenly an officer asked me, “Are you Pastor Amir?” It took me a lot of courage to affirm that question. “You are expected at the presidential palace tomorrow,” the officer said. “The new president and general chief of staff Al-Burhan awaits you tomorrow for a detailed report on the situation and wishes of the Christians!”

“At the same lectern of the dictator I read from the Word of God!”

The next day I stood in the Presidential Palace in front of 200 high-ranking officers of the Sudanese Army. At the same lectern where the former dictator had given his inflammatory speeches against Christians, I first prayed using Bible verses about the Son of God and then reported on our problems and desires as Sudanese Christians.

On that day, I felt like a General of Christ! How often had I been beaten, mocked and insulted by common policemen and soldiers in recent years! And today I was allowed to appear before generals, who quietly listened to the Words of Jesus like well-behaved schoolchildren. Already as I continued my speech, I thanked God for this miracle; I thanked Him for the friends of our mission all over the world, who have been faithfully accompanying us for years with their prayers.”