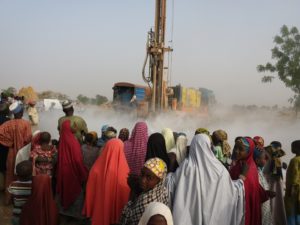 Our co-workers experienced a truly remarkable event in Northern Nigeria. After the local mullah’s child received a goat from The Goat Project, there came the special request that our co-workers must come for a visit.

On arrival, the conversation with the Islamic leader led to a specific request in mind. Their local village was in desperate need of water. The mullah said, “I know you Christians are people who keep to their word. I want you to give your word that you will provide our village with running water.” Our co-workers replied, “Only God can give you water, but we will pray and trust God to provide it.”

The local drilling companies refused to attempt the impossible since the ground below is layered with impenetrable rocks, preventing all previous drill projects from succeeding. Only one drilling company owned by Christians was brave enough to trust God for the task. For most of the drill, it was a spectacle of dust. 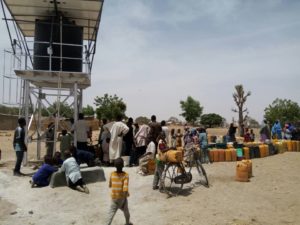 After several hours through the day into the late hours of the night, with many Muslims scorning the team’s efforts, there came a gush of running water shooting from the earth beneath. The mullah who attentively watched the operation stood up and shouted, “Jesus water!”

Since this miraculous intervention of God, which proved that our co-workers are followers of the only true God, the mullah publicly announced that everyone in his village who wanted to become Christians was free to do so! Praise the Lord for the powerful way He proves Himself in the most challenging and difficult circumstances.

Open Doors amid Turmoil in Sudan

Our local frontline worker in Sudan, Bro. Amir, knows what it means to be arrested,…